How it connects to start with. 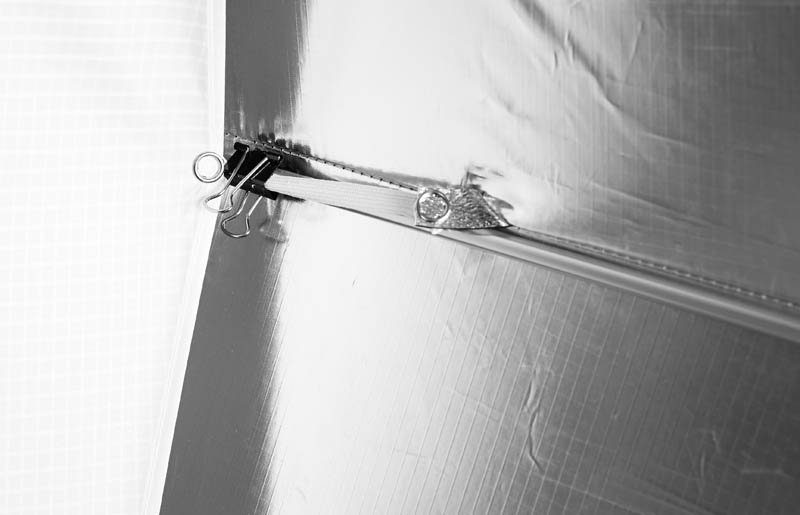 Using the box clip to stretch the elastic and clip tight to the pole. 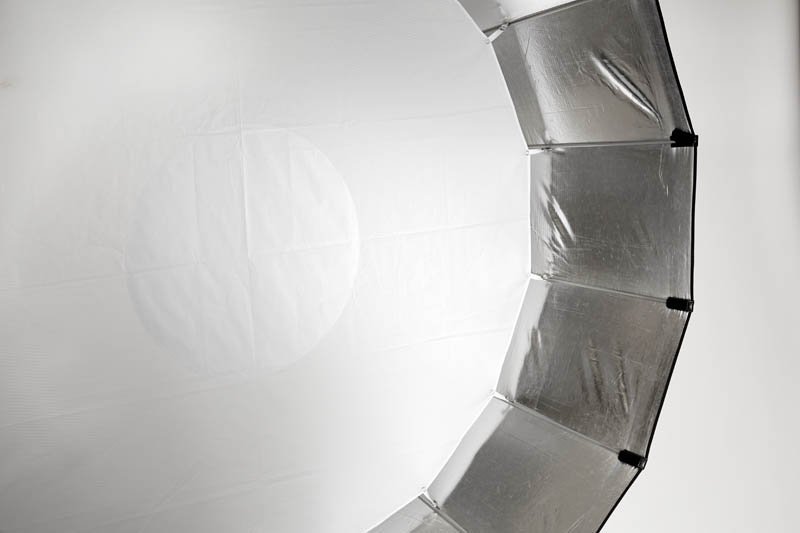 I have been using a light that is imported by Dynalight, Grand GSB 79.  Basically a giant umbrella with a diffuser placed about midway in the design. After working with it awhile, I was getting hard spill where the diffuser does not meet right to the edge of the structure. I searched the manufacturer’s web site and found no solution. For some reason Dynalite or the maker do not bring in to the US a front diffuser that would solve this little issue. I think the details make the difference, so I set out to find a solution and it was easy. Those little box clips you get at Staples or Office Depot were the solution. They are strong enough to hold via the elastic that is on the diffuser to clamp tightly to the pole. (See the second picture). This totally eliminates the spill light that is plagued by the initial design. So a few box clamps and the spill is gone.

As far as a diffuser, I have a 8×8 foot 1/2 silent silk made by the Rag place in LA for my front diffuser. This combination has worked very well. I travel with it in a 62″ Flip Lid from Lightware. I clip on the diffuser with little A clamps purchased at Home Depot.

DSLR Shade For Every Lens

I use both brand of 35 cameras. I was tired of all the lens shades that seem to clutter up my case. They all are designed specifically for each lens and work as they should but some of them are large and take up a lot of space.  One Friday while I was shooting a portrait with my Hasselblad and Phase back the light bulb went on. Why couldn’t I do the same with the 35 like I do with my Hasselblad?  I called the folks at Capture Integration and spoke with Dave Gallagher. He let me know he had some old Mamiya Lens shades for 645 and he was willing to let me try to solve my problem.

After receiving the shade, I needed to make some modifications. I need a threaded adapters that would fit the lenses and the lens shade. First off, I standardized everything to 77mm sizing, i

t was also the largest the the shade could handle that was a common size and readily available. Next I purchased step up rings for all my lenses so that they would be a universal 77mm thread. The easy part was now done. Now I needed to have adapters machined. One side to fit the lens shade and the other with a 77mm thread that would screw into the step up rings. Fortunately a friend and colleague had some machine time available so we arranged to meet for a friday breakfast and discuss the project.

After bacon, eggs, pancakes, fruit and coffee, he decided that brass was the material to start with. George bought a block of brass and proceeded to machine two adapters to fit the shade and lens.  They worked perfectly. The only drawback was being a little heavy but they were built like a tank.

After trying the brass adapters George offered to make one out of aluminum. It turned out significantly lighter, but the problem was with the 77mm threads. . Watching a tool head on a metal lathe make these little threads is fascinating. After taking it out of the lathe we discovered that the aluminum really likes to gall on such small threads. We used a real cheap block of aluminum ($3) for the build. I’m sure we should have purchased a higher quality of aluminum to fix the threading problem but we were only making one and it was just a trial.

In the end, I found that using some silicon paste and a Q-tip to put a little on the threads really solved the problem of screwing the adapter into the step up rings. Solved.

I’m using the shade on everything except for one of my wide lenses. I’m a happy camper. This shade swings both ways and doesn’t seem to mind that its Nikon one day and Canon the next.

Hope this gave you some ideas. Til next time…… 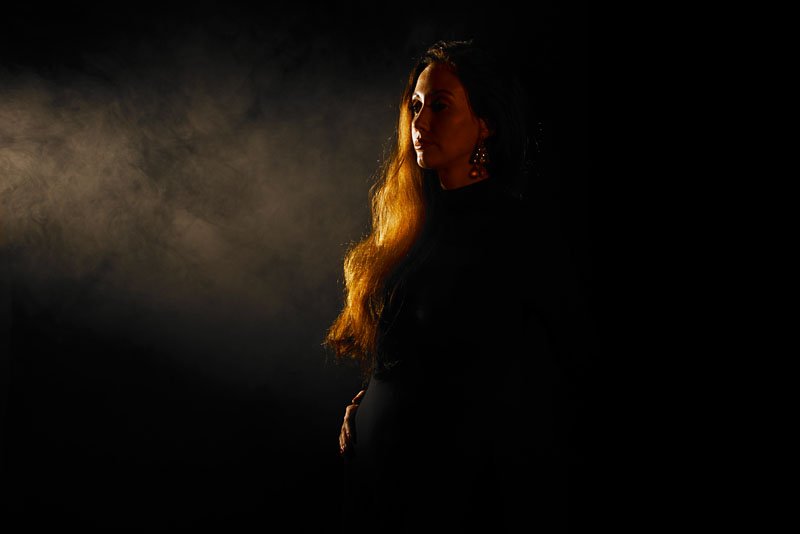 This was made using a Ranger pack with a standard reflector, with one of our new Highlight Discs (designed by Dr.Dan) and a 40 degree grid.  They come in three sizes and act just like an aperture  on your strobe head. We are showing here just one disc in a standard reflector can change the way you think about using a “standard” reflector. Generally, a standard reflector is designed to throw light out there with a specific coverage. With these discs and grids you can come up with amazing changes in how you control your highlight edges.

microGaffer tape is here! Grab your own pack.

Lightware Direct just got a new addition to the Cool Tools line in the store. Yeah I know, you say I just wrap some regular gaf tape around a pencil and keep some in all of my bags. Yeah I did to until I found these. I like having the different colors so if we are doing video I can mark (spike?) spots on the floor or carpet where the models are to be when they walk into the frame. I don’t have to buy huge rolls of the colors they already come the right size.  Also useful for marking a set here in the studio if we have to take it down for some reason and then reset. We do a little map and then also write on the tape what light went on that spot. Personally I like the bright colors for my work along with the universal black.

We have never before shown a product in development, but here is a first. This is the mold for a new product that has been in the works for quite awhile.

We went this way because we can make thousands of casts of this, so says the maker of the silicon product. Next week starts the final finishing so we can

start putting goo into the mold. (Goo = Secret stuff) The Goo has to be done before we do anything else as this will be the spine of the new product. Ahhhh… the 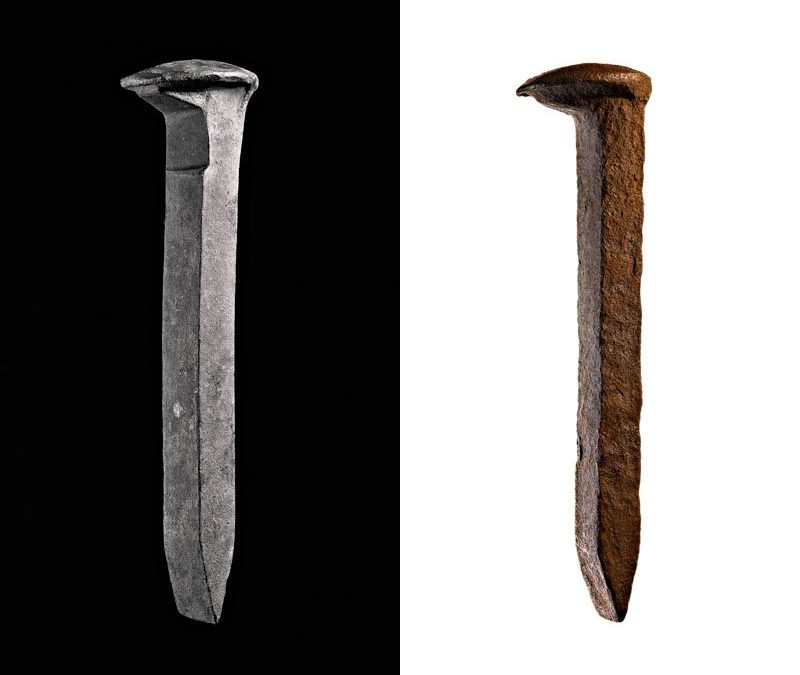 Background Color on a Railroad Spike

A interesting exercise is taking a look at images that are reversed. Same basic subject one on white one on black. One color, one Black and White. You can find many unique ways of looking at subjects by isolating the color and the background.

I think you agree that these images both make a different statement about a railroad stake.

FYI, the BW stake was supported using a rectangular piece of wood with a “V” slot cut into it.  It is about five inches above black velvet. Two SB 900’s were used along with a mirror to light the subject. The exact same lighting was used on the color stake. We have changed the lighting ratios and placed it on a piece of P25 matte white plexi. 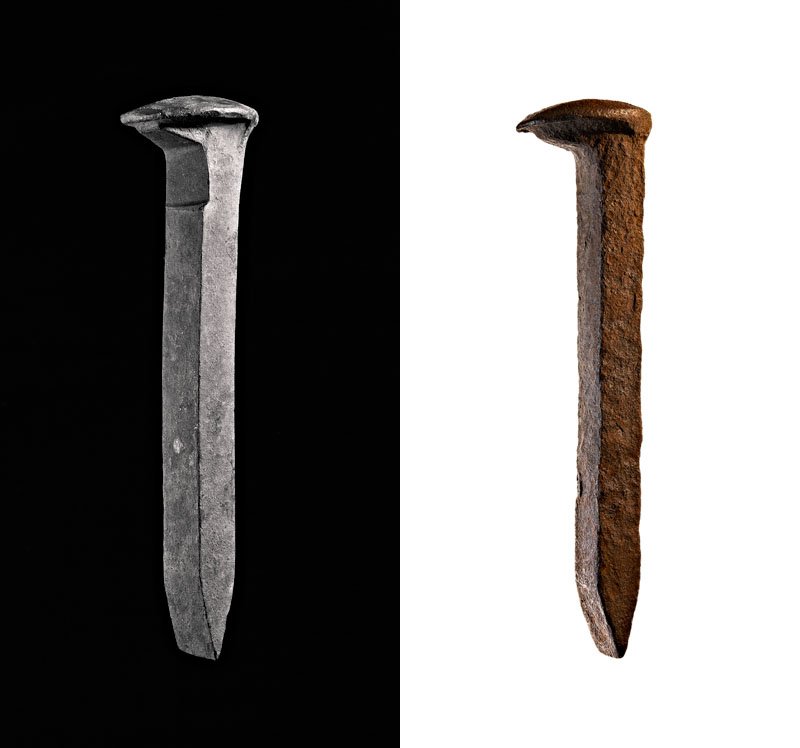