Modify the Paul C. Buff Umberella with a Piece of All-Thread 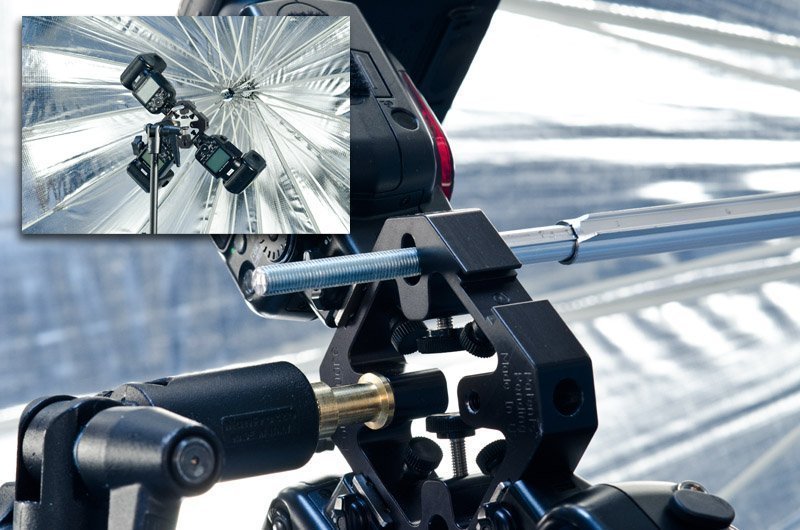 Well it has been some time since I posted last. Life kind of got in the way. Had a meeting with a surgeon and his scalpel. He worked on me for a long time. Fortunately I was a good patient and did not have to spend the night in the hospital, but was given instructions to do nothing for the next six weeks. Sit, walk around the block, nap, read a book … just don’t go back to work.  I started back at work when the recovery pain was tolerable. I did not do myself any favors by doing this, I just prolonged my recovery. It hasn’t been until this last week that I was feeling kind of like my old self. Lots of things changed, but getting back into the swing of things has been a challenge. My don’t list was running pretty long because of the chronic pain. I don’t want to do this, I don’t want to do that, I just don’t want to do anything if it hurts. But life keeps going even if your not ready to get back on the train.

I was working on a set up with two of the Paul C. Buff umbrellas when he brought out the “parabolic” series that were big. For some of the stuff we do here, having a couple of big/giant umbrellas throw light at a large group of people was just the ticket. This umbrella shown was one of the first that I bought and it had some challenges for me. The way it was designed there was not enough of the rod to go through the FourSquare block. (This has since been fixed). Trying to figure out a solution, I needed to make the rod longer and the umbrella pole was hollow. After scratching around the studio, I had a section of all-thread (1/4-20) that fit just perfectly into the center of the umbrella shaft with next to no play. For those that don’t know all-thread, it it a rod that is threaded so you can make your own bolts and connecting devices if standard bolts that are threaded are just to short. I cut off a section of all-thread about five inches and filed the burrs smooth after using a metal hack saw. I made sure it would go in as far as I needed then marked it with a sharpie at the point where it stopped. I then pulled it back out.

Next I mixed up some two part 5 minute epoxy and spread a generous amount on the end going into the shaft and proceeded to slowly push it in the umbrella shaft until I came up to the point I marked with the sharpie. Next I used a paper towel with some Acetone to wipe off the excess epoxy and then set it aside to dry.

The beauty of this fix for me is that with the all-thread, I can use it on the FourSquare Block, a Manfrotto 026 umbrella stand adapter, it fits into my Elinchrom heads, my Dynalite heads as well as an old set of Comets.

I really like that the all thread really beefs up the strength of the aluminum shaft. I’m sure that if you have broken a umbrella shaft before this is one way to put that umbrella back into service and not into the land fill. In fact I fixed an old Photek umbrella that I had broken years ago only needing to use a different size of all thread.

Hope this was helpful.